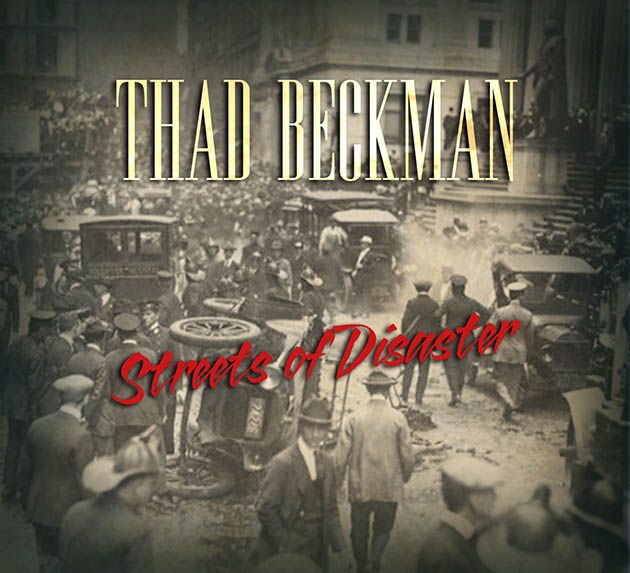 Now that star up in the sky still fills me with wonder
And the day of my death, well It’s still off yonder
But this world has gone insane, Like it’s let go of the reins
And it’s hurling down the street of disaster

I used to think our minds would somehow save us
Use the common sense the good lord gave us
But now I lock the door, sit and shiver on the floor
Listening to the winds of disaster

Oh me oh my, I miss my mama
As I go hurling down the street of disaster

There’s a woman on my block she walks in circles
Mutters to herself, believes in miracles
Now I don’t know what she see’s
But she gives me the creeps
As she circles the street of disaster

I bow down to nobody’s business
I bow down to no mankind
It’s just me and that boy, you call him jesus
He works his side of the street and I work mine
I got me some hookers and some business men
I got me a priest or two, a few presidents
Oh, they went down easy, Yeah, they went down fast
And their gonna have their fun until they breathe their last

I’ve been on the loose, I’ve been raisin’ Cain
Since the day they cast me out of the pearly gates
The Garden of Eden, Adam and Eve
Forbidden Fruit, one of my best days,

If you believe in love and kindness
If you believe justice will be done
I guarantee you’re gonna find me
For I do believe I’ve had my fun
They went down easy, yeah, they went down fast
And their gonna have their fun until they breathe their last
Then they will be mine, til the end of time
Ohohoh, yippee ki-yi-ya

I Went So Wrong

Bridge:
Now I can’t shake these blues
And I’m running out of time
With Hard luck at my heals
Now I know how it feels
To be lonely

Stirring Up Some Ashes

1st Chorus:  I thought that I was over you
Thought that I had seen it through
Thought I’d started livin again
Now I know I love you still
And I guess I always will
I guess nobody wins in the end

There’s nothing in that book of love
That tells you how to end a love affair
Or how to fix a love that’s broken down, now it’s
Way beyond repair

2nd Chorus:  It was bound to end some day
For I was night and you were day
You loved the sun and I loved the rain
But our love is just a memory
You're still you and I’m still me
I guess nobody wins in the end

Bridge:  Now they say the truth will set you free
Well that truth is right in front of me
In  this picture that I’m holdin in my hand
Tellin me nobody wins in the end

Blues in my Blood

and left that little girl in Tennessee

well my car broke down in Houston
and I could not find a soul to give me time
that town will run you down and not look back
to see if you’re alive
now the clouds were growin’ dark
and the local folks were talkin’ hurricane
so I hitched a ride on 45,
hopin’ I could out run the rain

Chorus:
I got the blues, in my blood
These old blues fit me like a glove
I’ve had the blues, right from the start
I was born with the blues in my heart

well I made it up to Dallas spent
a long and sleepless night in a cheap hotel
where the walls were paper thin and I could
hear my next door neighbors raisin hell
and in the morning I was tired and I was hungry but too broke to  buy a meal.
I swear, if I’d run into the devil I believe I would have tried to make a deal

the wind is blowin cold tonight, in santé fe
they’re closing down the square
and everybody’s headin’ home but me
I ain’t headin’ anywhere
It’s a thousand miles to reno
And a thousand miles to Tennessee
I’m half way home and half way gone
and far away from where I want to be

I woke up today, good morning heartache
I could use a cup coffee how about you
It sure is quiet let’s put on some music
But first excuse me while I cry a tear or two

Chorus:
My friends all say I’m better off without you
Knowing that they’re right don’t stop this pain
They all say you took away my sunshine
And left me standing in the pouring rain

If Only My Heart Had a Brain

I’ve been known to be wrong in matters of romance
If only my heart had a brain
But I’ve never thought that livin was easy
or love …..just a game

now love that is true I’ve tried to define it
I even once thought that I knew
I touched it, I held it, so quickly I failed it
Then watched as it faded from view

women I’ve known all shapes and sizes
and all different points of view
I loved them, I held them,
so quickly I failed them
Then watched as they faded from view

Now if you want perfection, I know where to find it
Just look at the stars and the moon
But if your lookin for love well honey you’re on your own
Lord knows I haven’t a clue

How you wanted me to love you and you treat me mean
How do you want me to love you, you keep on treatin' me mean
You're my daily thought and my nightly dream

He said he got that blue wing up in Walla Walla
And his cellmate there was Little Willy John
And Willy he was once a great blues singer
And Wing and Willy wrote 'em up a song. They said...

Chorus:
It's dark in here; can't see the sky
But I look at this blue wing and I close my eyes
And I fly away beyond these walls
Up above the clouds where the rain don't fall
On a poor man's dream.

They paroled Blue Wing in August, of 1963
He moved north picking apples to the town of Wenatchee
Then winter finally caught him in a run down trailer park
On the south side of Seattle where the days grow gray and dark

Well he drank his way to la, and that's where he died
And no one knew his Christian name and there was no one there to cry
But I dreamt there was a funeral, a preacher and a cheap pine box
And half way through the service, Blue Wing began to talk. He said...

Get News From Thad

with Mary Flower and Mark Shark